The new Motion Lab Active Commute is claimed to be the first rucksack of its kind that aims to take the weight of your pack completely off your shoulders. By doing this the Active Commute should, in theory, allow you to move unencumbered by the usual shoulder strap design of the typical rucksack. Aimed at the commuter (and running) market the Active Commuter’s USP is the external aluminium support structure and hard nylon central ‘spine’ that aim to keep the main pack away from the shoulders and place the weight instead, across your hips.

The best cycling packs for 2019

It has a generous twenty two litres of storage split between two main compartments plus several smaller pockets. The layout is superb and possibly one of the best of any commuter pack I have used. The large main clothing compartment easily takes a change of clothes plus it has a zipped pocket for sundries and pump straps. Behind this is the area for your laptop or tablet. Both of which can be accommodated in protective fleece and/or neoprene alongside several mesh organisers.

At the bottom of the bag is a neat waterproof shoe/towel/wet clothing pocket that expands into the main compartment and keeps the dirty stuff away from your clean clothes. A couple of mesh bottle pockets, a soft lined valuables pocket and two easy to access pockets on the rib straps complete the deal. All in there really is nothing missing with regards to storage; this is a pack that has been very comprehensively thought out.

There has been a long established physiological understanding that the most efficient way of carrying a load is to spread the weight onto the hips and pelvis. Hiking packs have been following this principle for many years but until the Motion Lab Active Commute came along, pretty much every cycling focussed pack only really use hip belts to stabilise sideways movement.

Thus keeping all the load passing through the shoulders. At first glance the pack looks pretty complicated when compared to a standard rucksack and feels pretty uncomfortable when put on. Thanks to the strap arrangement, articulated sections and complicated design you are encouraged to watch the instructional video on the Motion Lab website before using it. This video is thirteen minutes long. Yes, you heard that right, thirteen minutes of instruction. In order to put a rucksack on.

After working out how to adjust the length of the central spine to ensure the hip belt is in the right place (you should feel the top of your hip bone in the gap between the padding) it’s then time to sort the shoulders out. For this it takes you through how to adjust the multiple straps in order to get the crossover ‘shoulder’ straps to sit correctly and to ensure that the solid metal and plastic harness sit proud of your shoulders and collar bones. It’s a world away from swinging a rucksack onto your back, tightening a couple of straps and away you go. Once adjusted walking around with the Active Commute on is a very comfortable experience and quite liberating given the range of movement it allows your upper body.

The adjustable hip belt and spine takes the weight of the pack away from your shoulders.

With the pack correctly adjusted I packed my laptop and clothes and prepared to ride home. The hard plastic sternum clip that keeps the straps in place felt a touch uncomfortable but I put this down to my bony physique rather than the design but everything else felt quite comfortable. However as soon as I started riding and assumed my normal riding position the hip belt started to slip causing the hard plastic and metal shoulder supports to sink and dig into my shoulders causing quite a bit of pain. I stopped to check and readjust but despite changing the back length the hip belt just would not stay in place unless it was tightened to the point of restricting breathing. Something I certainly wasn’t prepared to do.

Rebalancing and tightening the shoulder straps to alleviate the shoulder issues and the padding on both the sternum clip and back support became totally ineffective causing severe pain across my chest and at the junction between ribs and spine. By the time I got home after an agonising ride I had bruising and marks across my shoulders, chest and back. 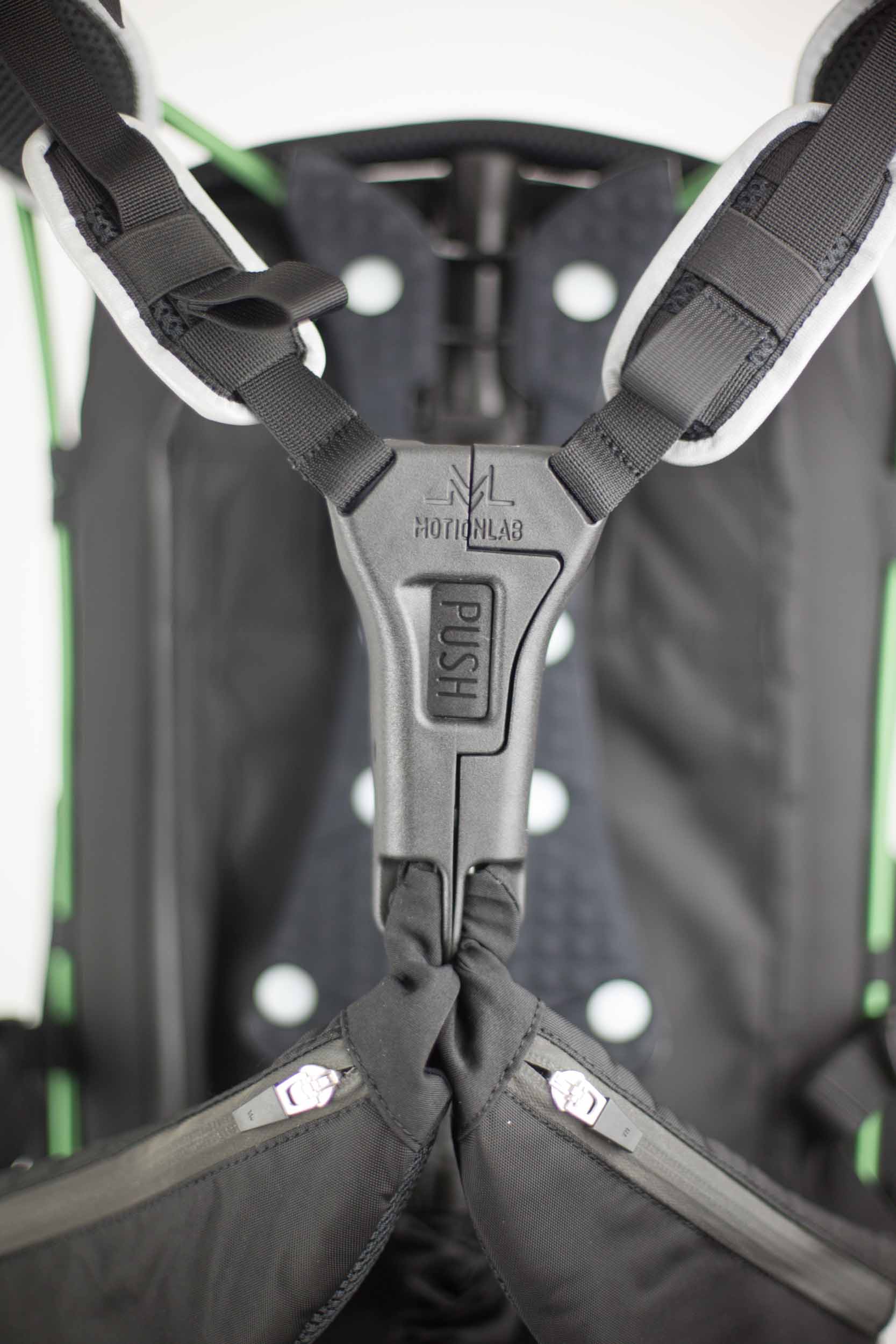 Going back to the website and going through the multiple pages of troubleshooting hints and after a couple of days to let my body recover I tried again. To the same results. I pared down my load to just a laptop and associated charger and still the same thing. After another couple of excruciating commutes I gave up and went to a basic rucksack that felt like bliss.

Even loading the pack is a chore due to the extended hip belt and spine. It doesn’t sit up steadily allowing you to easily place your items. The Motion Lab website tells you to disconnect the hip belt completely for loading but this quickly becomes tedious and time consuming.

It seems the issue is all down to hip angles. Myself and most people I know ride a drop handlebar road bike to work. This rotates the hips and back to such an extent that the weight of a pack isn’t supported by the hip belt and therefore the weight is redistributed throughout the rest of the pack. It also means that the hip belt has nothing to support it or keep it in place (without tightening it to such an extreme that it restricts breathing). So for commuters that adopt a less than totally upright riding position the Motion Lab Active Commute’s unique back system is totally ineffective. If however you partake in a sedate commute on a very upright town bike the Active Commute might work for you.

There is a set of straps that allow you to use the Active Commute sans metal framework and I would highly recommend using these if you so wish to ride a bike and use this pack. However that converts the pack into a very expensive version of a ‘normal’ rucksack and at this point you could pick a far better pack for less than half the price of the extraordinarily expensive Active Commute.

Motion Lab are aware of our concerns and issues and have stated that there is a new version due later this year/start of 2020 that addresses many of the fundamental problems for cycle users.

Expensive, overly complicated and painful. Unless you spend most of your time running, walking or in a very upright riding position for very short commutes then almost every other commuting rucksack is a better option.